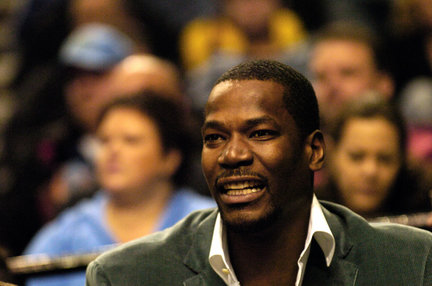 Former Portland Trail Blazers forward Clifford Robinson has had an active post-NBA career. He was on the hit reality show Survivor, where he finished 14th and was the fifth player to be voted off the show that season. He was a part of a team assembled by Dennis Rodman to go to North Korea and play the North Korean National Team in celebration of Kim Jong-un’s birthday in 2014.

Now he wants to enter the next phase of his post-playing career. The Detroit Free Presstells us Robinson, 49, is now a marijuana advocate and will be a speaker at the Cannabis Collaborative Conference in early February in Portland, Oregon. He also plans to begin a grow operation in Oregon later this year and is calling himself “Uncle Spliffy” — a play on his ‘Uncle Cliffy’ nickname.

Nowadays, Robinson, 49, is promoting marijuana, and will be a feature speaker at the Cannabis Collaborative Conference on Feb. 3-4 in Portland, Ore., where Robinson played for the Trail Blazers from 1989-97.

“I think I’ve always been an advocate for cannabis,” Robinson told KOIN 6 News in Portland. “(It’s) calming, calm my stomach, calm my nerves a little bit. So from that standpoint, I see a lot of positives.”

Here’s Robinson discussing his new venture and his interest in cannabis.

Once a Blazer always a Blazer, you know?