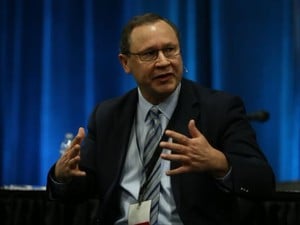 The head of Oregon’s pot regulatory agency on Wednesday blasted retailers who got caught selling marijuana to minors in a series of late-2017 sting operations.
“There is nothing more damaging than that,” Steve Marks, executive director of the Oregon Liquor Control Commission, told audience members at the fourth annual Cannabis Collaborative Conference at the Portland Expo Center. “Your friends in government are really, really disappointed.”

The theme of this year’s conference was how to turn a profit — but some marijuana retailers find that hard as they face restrictive regulations that stop them from opening bank accounts and writing off expenses on tax returns like other businesses in America.

Marks was delivering opening remarks with his counterpart Rick Garza, director of the Washington State Liquor and Cannabis Board, who reassured the crowd that compliance with Oregon law will improve. Garza said Washington had compliance issues in the early days, too.

Read the whole story at the Statesman Journal.