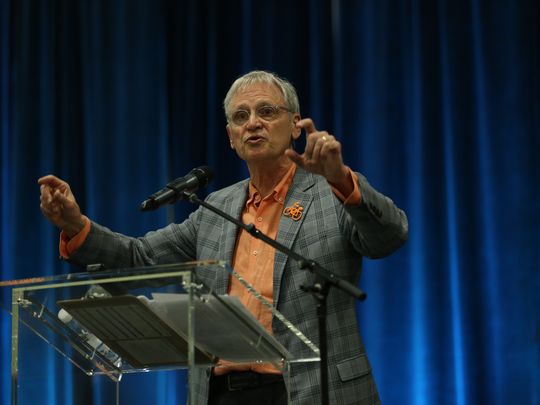 PORTLAND — The head of Oregon’s pot regulatory agency on Wednesday blasted retailers who got caught selling marijuana to minors in a series of late-2017 sting operations.

“There is nothing more damaging than that,” Steve Marks, executive director of the Oregon Liquor Control Commission, told audience members at the fourth annual Cannabis Collaborative Conference at the Portland Expo Center. “Your friends in government are really, really disappointed.”

The theme of this year’s conference was how to turn a profit — but some marijuana retailers find that hard as they face restrictive regulations that stop them from opening bank accounts and writing off expenses on tax returns like other businesses in America.

Marks was delivering opening remarks with his counterpart Rick Garza, director of the Washington State Liquor and Cannabis Board, who reassured the crowd that compliance with Oregon law will improve. Garza said Washington had compliance issues in the early days, too.

“It will get better,” Garza said. “I mean that’s what I keep telling Steve, because that was our experience. And that’s the experience of the other states.”

Marks responded: “Rick’s been through it, but I’m not as ready to forgive or forget, or not to follow through.”

The fact that retailers sold pot to minors didn’t escape the notice of U.S. Rep. Earl Blumenauer, D-Oregon, who called it “outrageous” at Wednesday’s conference.

“OLCC has to continue to crack down and to train,” Blumenauer said in an interview. “We have to be vigilant.”

He likened it to retailers selling alcohol to minors, which still happens decades after the end of Prohibition. “There ought to be zero tolerance for people who sell alcohol or marijuana to kids.”

The gathering of more than 1,000 industry players came only weeks after U.S. Attorney General Jeff Sessions’ decision to cancel the so-called Cole memo, which basically directed federal prosecutors to steer clear of legal marijuana operations. The move triggered outrage, and some degree of worry, through the marijuana industry, with speakers like Marks touching on it Wednesday.

But banking and taxes have a larger impact on businesses’ day-to-day operations than the Cole memo, says Beau Whitney, an economist with Washington, D.C.-based cannabis analytics firm New Frontier Data.

To ease the way for banks to work with marijuana businesses, the U.S. Treasury Department issued guidelines in 2014 that worked in concert with the Cole memo. The memo’s cancellation has spurred fears that the federal government may also take away financial protections.

Marijuana retailers aren’t allowed all the same tax breaks as other businesses thanks to part of the federal tax code called 280E, which was installed in 1982 to stop tax write-offs from illegal drug sales.

Because taxes outweighed his pay as a business owner, “I had to pay $15,000 to work this year, essentially,” DeCamp said before the conference.

Worrying about the rescission of the Cole memo is “not at the top of my list right now,” he said. “If I just focused on getting in trouble all the time, I would go crazy.”

DeCamp says his credit score is around 800. But that doesn’t do him much good when he applies for a loan. Marijuana is still illegal under federal law, so banks generally won’t touch marijuana business owners like him.

Institutions like Salem-based Maps Credit Union have taken on such clients. But even that presents logistical problems.

For Joseph Hopkins, who owns marijuana stores in Detroit and Eugene, getting a Maps account was an ordeal. “It shouldn’t take a business five months in order to get a bank account,” he said.

As it stands, Hopkins has about an hour or so drive to get from either Eugene or Detroit to the credit union, taking away energy and time he should be spending running his business.

For daily deposits, Hopkins wishes he could just walk to a bank across the street.